"A minefield of information"

PLEASE NOTE: This is the Archived Sexyloops Board from years 2004-2013.
Our active community is here: http://www.sexyloops.co.uk/theboard/

Common Cents for Sexyloopers - More than you want to know.

There is only one source of data, called ATMA Fly Line Standards. The rest are simple calculations. Of course, ERN and ELN are related, and I have used the term ERN=ELN, so don’t read everything as too literal.

You ask how ERN Values came to be. Take a look at the Rosetta Stone and at Part 3, Figure 3. 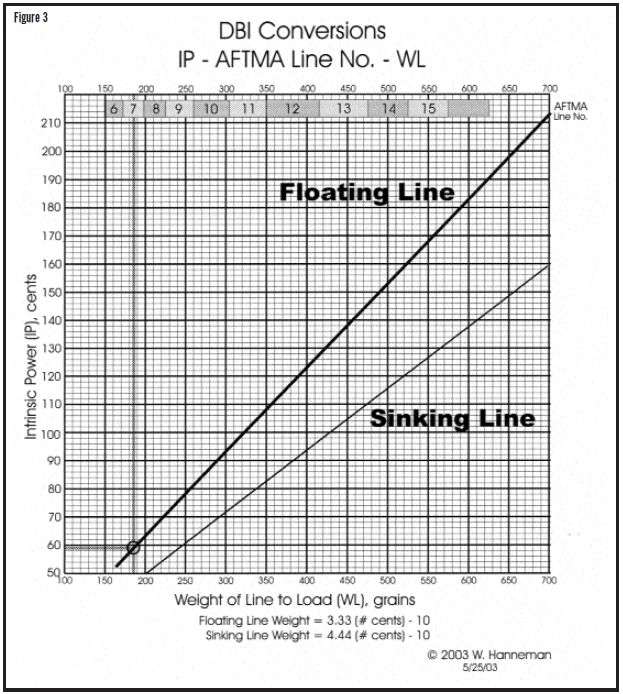 You will note it is a linear graph, and you will also note the AFTMA Line Number is non linear - BY DEFINITION! I simply point by point replotted the data.

Everything you have done is in accordance with the CCS and the CCS has done exactly what it was designed to do, i.e. To provide a relative number for the intrinsic power of the rod. The ERN is a static measurement and it is what it is - an intrinsic property of the rod and it doesn’t change. (Incidentally, the term 9-Wt rod has no particular meaning since it has never been defined.) Unfortunately, that ERN number may not be as useful as you might wish it to on this particular problem, nor should it. See below.


For heavy rods, the ERN values are usually far off the numbers stated on the rod (and the line weights most of us prefer)

This presumes the ERN values should always match the preferred line weights. But, this premise is simply wrong, and I am getting sort of tired of having to explain this, especially to engineers.

It has every thing to due with momentum and the difference between a “normal” cast of thirty feet and a “typical” cast of fifty feet which entails employment of single or double hauls. Since no one can factor in the variations due to hauling, the data on Part III, Figure 3 were obviously based on “normal” casts.

Consequently, one might say, “If one employs a “normal” casting style, the ERN serves as good approximations of the line and length of line to be used. If one employes hauls when casting, the weight of the line can be reduced.

What this boils down to is this. There is no right or wrong line you should use. It is just a matter of your personal preference - tempered by how far you wish to cast and your skill in hauling.
Top

For heavy rods, the ERN values are usually far off the numbers stated on the rod (and the line weights most of us prefer)

This presumes the ERN values should always match the preferred line weights. But, this premise is simply wrong, and I am getting sort of tired of having to explain this, especially to engineers.

In fact I've on many occasions defended and explained that this particular issue does not make CCS a useless system, (for some) only a confusing system. And Bill, the most confused ones are not the engineers...

To totally avoid this issue (confusion) I now prefer to use the measured IP value (in grams) directly instead of the ERN value.

Cheers,
Grunde
"Essentially, all models are wrong, but some are useful."
George E. P. Box

I'm with Grunde on preferring to use IP as the measured value I use for comparisons.

Side issue. In the past couple of months I have found myself writing about at least 6 fly lines which are for rods of a specific line-weight but those lines do not conform to the AFFTA (old AFTMA) system of line classification. So for example i have a line marked #8 with a 19g head (10.5m) - I guess the AFFTA for that line would be around #10.

I don't think this is a major crisis, the sky will not fall, the complexity of the situation has not given me a nose-bleed, and some of those lines are really rather good. However I think it illustrates that we treat 'rod-weight' as something measured and consistent, something, equal in all rods with the same line recommendation painted on the butt, the simple fact is that it isn't.

All those lines are heavier than the AFTMA line class they have marked on the box. For my part, I would be willing to consider a different way of 'classing' lines - and I would like a more consistent, more objective, way of describing fly rods.

"X-rays will prove to be a hoax."
"Radio has no future."
"Heavier than air flying machines are impossible."
Lord Kelvin
Top

Dave,
A search in Google books came up with this source for some of your book. It looks like a labor of love, and is an impressive piece of work. Your web site is very interesting as well.

What was your area of research? Was it related to mechanical engineering?

I hope you can do something similar for fly rods. We can use some insight from more PhD's now that Grunde and Thorsten are not contributing their extensive knowledge about the physics of casting on the technical forum any more.

Users browsing this forum: No registered users and 9 guests